As the year drew to a close, the boys down at the podcast factory had some guests on to talk about playtesting. (Episode 95 ) In that episode, the idea of collecting data about games played came up. In some other podcasts, as the year has closed out, discussions of data collection about games played also came up. Then the year end happened, resolutions get covered, pledged, railed against, and more. In order to maintain a resolution, you have to remember not only that you need to do it, but that you did it. So again, we have data collection as a theme. It seems to be quite the time to talk about the idea in the hobby masses.

Personally, I love data. Simple as that. I find the insights and “oh, really?” moments you get from parsing through collected information about a subject to be really interesting. This leads to a love of info-graphics, but that tidbit isn’t as needed today. Today, we’re going to talk about data collection in your hobby life. A simple thing, but something that can be neat to see at the end of your collection cycle. Besides, most gamers are nerds on some level, right? We love numbers and dice and “mathhammer”. Why not apply that to more aspects of the hobby, but, ya know, in a meaningful way. 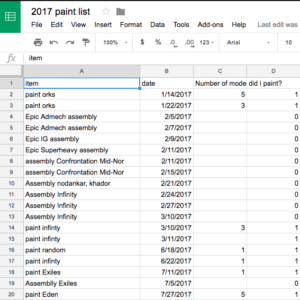 Over the past few years, I’ve been keeping records of my hobby time. This past year was no different. I kept track of hobby time spent in my little corner of the house. I did not track anything outside of that. I kept it fairly simple: Instances where I painted, Instances where I built or assembled models, Instances where I made bases, the number of finished models, and the dates these things all happen. In the past, I only tracked painted models, so this was a bit of a step up in complexity. I did not track time when I only primed a model as that doesn’t feel like it takes enough time to be considered effort.

This year, I’m increasing the complexity yet again. I’m taking the opportunity to track:

For each of these, I’m tracking the Game and the Faction as well. This way, I can review later and see what game got the most attention, which faction I played the most, and which models I painted more. I think over time, this could be a neat set to compare with. Did I play Faction A because it was already painted? Did I play Faction B even though it wasn’t painted? Did I focus on one game or did I spread out among many? In the future, what will that look like? Will I see a slow decline of a specific system?

If you want to start collecting data, you need to know what you want to know. You could certainly just start tracking things and seeing what happens. However, you may find you lack certain details because you didn’t think to track them, or you may have unnecessary information that was tedious to collect.

How to Collect it

Personally, I used a Google Sheets document. This way I can modify it on my phone, my tablet, at work, at home, anywhere. This leads to less “Oops, I forgot I did that.” You can certainly change it up though.

David Witek of Garagehammer used a “little black book” for tracking hours painting. He picked it up because it fit in a small pocket and fit his data needs. Super simple device to collect data. Very “low-tech” and approachable. The problem with this one happens when you have lots of data you want and eventually getting useful information out of it. 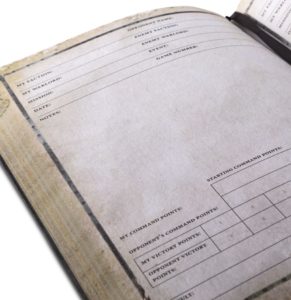 Some folks have guiltily/unashamedly admitted to picking up the Games Workshop Battle Journal. This is a product specifically sold to track games played. It allows for certain bits of information and a spot for photos or notes to be plastered in. I can see the appeal if you like to recount your battle reports to your buddies on a forum or something. The problem with this one is that you cannot collect non-game hobby data with it. 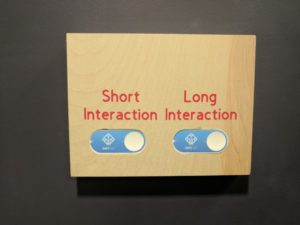 You could go full nerd and use IoT devices. At work, I used an Amazon Button system to track when my students performed certain tasks. It was easy because they just pushed a button hanging on a wall. It was annoying because the type of information tracked wasn’t very robust. It solved the previous problem of them just not tracking things at all, but did have that trade off in scope. I could make it more robust, but long term support and sustainability became an issue

Clean data is very important. I have debated using a Google Form that imports into a spreadsheet. This way I can have a nice, easy interface that helps me keep the information consistent. One of my personal pain points this year was in the way I phrased things. Eg: “Assembled Faction” vs “Game Faction Assembled”.

Easy to use. If you find it tedious to maintain, you’re not going to do it. Whatever system, methodology, or collected information you decide to use, make sure it is something you can maintain. Giving up half way through isn’t going to help.

What do you do with it

Once you have your data and you decide to wrap it up, what do you do with the information? If you know someone who is a Tableau or R master, maybe give it them to do something interesting with it. 😀

Or, if you are like me, maybe just do some simple graphs in a spreadsheet. The wizards for creating those things are pretty intuitive for simple graphs. The more complex stuff might take some effort.

Then build on that information. It may influence your decisions, it may not. It might just tell an interesting story of your hobby life. Sony Entertainment thinks that works for Playstation Plus members. They just sent me an email telling me how much time I spent in certain games on my PS4 this year.

You can see in my own tracking where I ended up having free time during surgery recovery. Turns out, I painted just as many models then as I did the rest of the year. That led to me making a resolution this year to play and paint more in general. I can also use that to determine success. What is “more” after all? One more game? Or 20 more games? How will you measure your own success?

What are some of the things you track? What do you do with that data? Hop on over to the Skirmish Supremacy Street Team on Facebook and let us know.